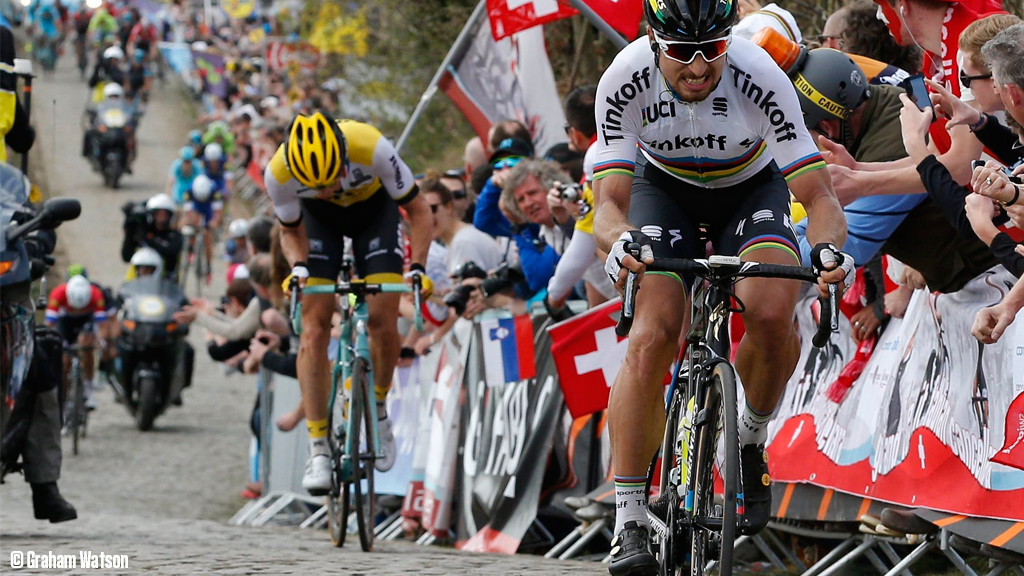 A one-two of Peter Sagan and Fabian Cancellara, followed by Sep Vanmarcke, the most Flandrian of Flandrian riders, was the perfect podium for the 100th edition of the Tour of Flanders.

The ride by Tinkoff-Saxo’s Sagan was one for the ages, summed up perfectly by the world champion’s description of his race tactics. “Nobody wants to work with me. It’s always better to drop everybody,” he said after his historic win.

It was made to sound like a computer game. So much easier said than done. Tom Boonen, a three-time winner of the race labeled it, “a massive performance”. And it was.

The Trek Factory Racing cobbled classics legend, Cancellara, made a tactical mistake, when a group of three that included Sagan, broke away 35km from the finish. But that wasn’t the deciding factor. Cancellara, a four-time world time trial champion, was working with Vanmarcke and got within 13-seconds of Sagan yet he couldn’t close the gap.

Sagan’s strength was the difference.

In the race for second place Sep Vanmarcke, out of respect for Cancellara riding his final Flanders, chose not to sprint. It was a PR win. He wouldn’t have won the sprint anyway so came out looking like a gentleman, and finished third having been the third best rider on the day.

Last year’s winner, Katusha’s Alexander Kristoff, won the sprint for fourth, ahead of Luke Rowe, who has ridden both editions of the Cadel Evans Great Ocean Road Race with distinction for Team Sky. Let us hope they contest a similar battle on the Surf Coast and Geelong’s waterfront in 2017.

The women’s race came down to the wire.

It was a tense finale and with a kilometre to go they had just a 10-second advantage on a group of eight. Armistead was forced to lead the sprint but held her nerve, leaving the sprint late and in a photo finish that left both wondering who won, she took the win by a whisker.

Armistead and Sagan are the current UCI road world champions and the matching rainbow jerseys on the podium made the photographers happy, providing the editorial teams in Belgium with classic front and back page pics.

A SUNDAY IN HELL

This Sunday is Paris-Roubaix, the most prestigious of the one-day classics.

It’s 257.4km of torture across 27 sectors of cobblestones, which make-up 52.8km of the course, that rattle the bones.

Again it will be an emotional day for Fabian Cancellara as he rides the race, which he’s won three times, for the last time. After finishing second at Flanders, Cancellara said, “I am not happy. I race for winning.” The fire still burns and for many he is the favourite to win Roubaix.

Others, understandably, are backing Sagan to continue his winning ways.

The Belgians are hoping for a fairytale Tom Boonen win for Etixx-Quickstep, which would make it a record breaking fifth victory in the race. Based on his 15th place finish in Flanders, the Hollywood ending is highly unlikely.

I’m tipping Katusha’s Alexander Kristoff to win. Struck down with illness in the week before Flanders, Kristoff came out the other side with a solid fourth. He’s been winning the world’s biggest races for a while now and it’s form line that’s hard to ignore.

But there are so many variables. The crashes and punctures caused by the cobbles, the narrow roads and winds make Roubaix the most difficult race to control. A surprise result is always on the cards.

Related
Tour of Flanders - the race that stops a nation