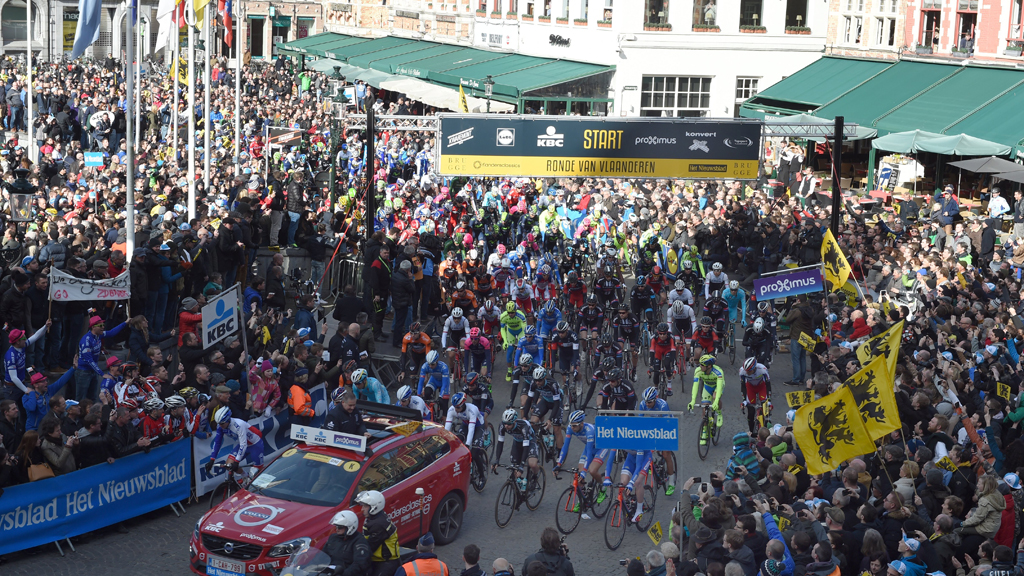 Tour of Flanders – the race that stops a nation

With the Cadel Evans Great Ocean Road Race behind us for another year the eyes of the cycling world have turned their attention to Europe.

The Cadel Evans Great Ocean Road Race is Australia’s own ‘classic’ and in many ways was inspired by the prestigious “Spring Classics” of Europe.

Thanks to the support of VicHealth’s H30 challenge and to keep you up to date with what the world’s best teams and riders are up to during the Classics season we are delighted to have Australia’s leading cycling commentator, Matt Keenan, join us as a guest writer.

Melbournians boast proudly about a horse race that stops a nation, but as big as the Melbourne Cup is, it doesn’t have anywhere near as big an impact on Australia as the Tour of Flanders has on Belgium.

For the men this year it is the 100th edition of the Tour of Flanders and it will quite literally, stop the nation.

For the last four hours of the race the television audience share for the Tour of Flanders averages 75 per cent. Three out of four televisions in Belgian households are tuned into the race.

Plus up to a million people line the 256km of small farm roads and narrow cobbled climbs to create the festive spirit, eat hot frites to keep warm, wave flags and yell in support of their favourite riders.

In the light of the horrific terror attacks in Brussels and the tragic deaths of two young Belgian cyclists in recent days, a bike race doesn’t seem that important. But these tragedies make the 2016 Tour of Flanders even more important.

It’s the biggest day on Belgium’s sporting calendar and one of the country’s proudest days, as it’s on display to the world. The Tour of Flanders is a chance for Belgium to shows its resolve – of which it has plenty – and its unity, which has often been questioned with the Flemish speaking north and the French speaking south.

So while the result isn’t particularly important, the Tour of Flanders has never been more important than it will be this Sunday.

Six riders have won the men’s race three times and two of them, the legendary Fabian Cancellara and Tom Boonen, will be riding the race for the last time on Sunday.

The odds of Boonen winning are long. An awful crash, in the Tour of Abu Dhabi late last year cost him his hearing in one ear and has affected his preparation for his final season.

Cancellara, on the other hand, goes into the race as the number two favourite behind Peter Sagan. Sagan and Cancellara were clearly the strongest two riders at Gent-Wevelgem last Sunday, a race Sagan ultimately triumphed in.

They rode shoulder-to-shoulder, like a couple of mates half-wheeling each other, from the bottom of the final ascent with Sagan crossing the top of the climb a bike length clear.

Sagan, the current world champion, is the man to beat again and all eyes will be on he and his rainbow jersey as he is sure to be in the mix at the end of the race.

No Australian has won the race. The most likely this year is IAM’s Heinrich Haussler.

Heinrich was second in 2009, sixth in 2013 and is in great shape after a solid seventh at Milan-San Remo, two weeks ago.

And just as the Cadel Evans Great Ocean Road Race (CEGORR) has a men’s and women’s race so too does the Tour of Flanders.

This year will be the ninth edition of the women’s race and although no Australian has won it, Germany’s Judith Arndt, who now calls Melbourne home, has won it twice.

Amanda Spratt, who won this year’s Deakin University Women’s Race, is a long shot but her teammate, Gracie Elvin, is among the women to watch. Gracie was second at the Ronde van Drenthe, the biggest women’s race in Holland, and has the form and mental toughness required to win in Flanders.

Whatever the outcome of the race, be sure to pay plenty of attention to the spectators. The 2016 Tour of Flanders more than ever will be a magnificent display of Belgian pride.