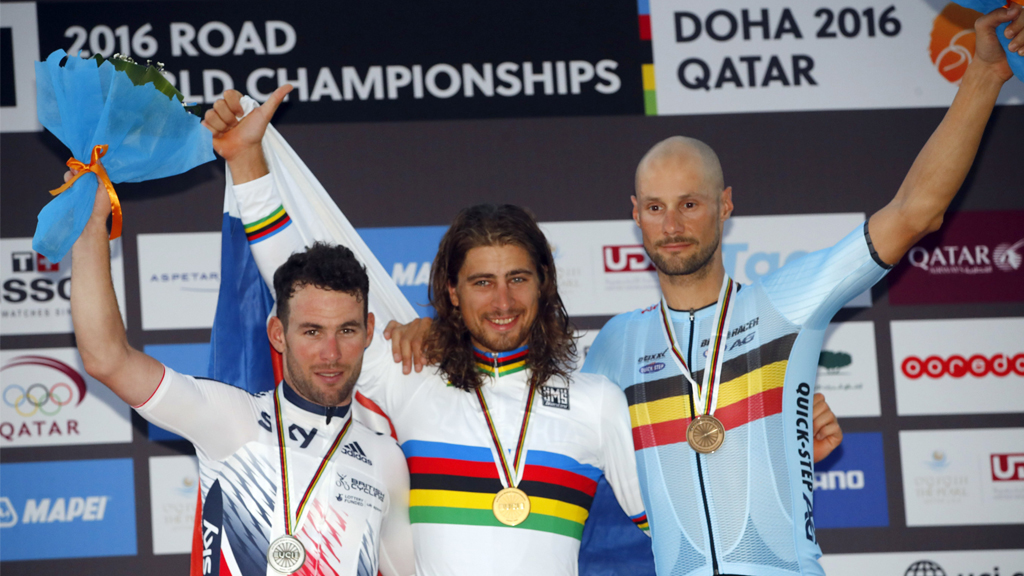 The much talked about 2016 UCI Road Cycling World Championship took place over the last week in Doha, Qatar with the technical circuit and stifling heat keeping the action interesting despite the flat parcours.

We take a look at the elite winners in today’s #YearInReview:

At 41 years of age Amber Neben (USA) claimed the women’s time trial title, eight years after she first won in 2008.

As the oldest starter in the field, Neben’s victory, in a time of 36:37.04, was too good for European champion Ellen van Dijk (Netherlands) and Katrin Garfoot (Australia) who finished six and eight seconds down respectively.

The American best managed the conditions, posting the second fastest time behind van Dijk at the second intermediate checkpoint, before finishing strongly to claim the top step of the podium.

The 2016 men’s time trial saw a return to the old Tony Martin (Germany), with the 31-year-old claiming his fourth rainbow jersey in the discipline.

After tinkering with his position in attempt to be more aerodynamic over the past seasons, Martin returned to his old position and it paid off with a massive 45second victory on the 40km course.

Denmark’s Amalie Dideriksen pulled off a surprise victory in the women’s road race, sprinting to the gold medal ahead of pre-race favourite Kirsten Wild (Netherlands) and Lotta Lepisto (Finland).

The Dutch team used their full quota of eight riders to soften up the peloton, launching countless attacks for the majority of 135km race.

As many dropped off the back, the orange outfit remained strong with most of the team still available to assist in the lead out in the final five kilometres. But in the end it was Dideriksen who launched off the wheel of their sprinter Wild to spoil the parade.

Slovenian Peter Sagan made it back-to-back world titles when he reigned supreme on Sunday in the men’s road race.

Sagan won a reduced bunch sprint ahead of race favourite Mark Cavendish (Great Britain) and Tom Boonen (Belgium) who rounded out the podium.

Heat and crosswinds made for a difficult day in the saddle for the peloton. When Belgium took the race into their own hands and put the pressure on, only around 30 riders made the first group and anyone in the wrong position was left behind and out of contention.

In the end just 53 riders finished, but the race was on for those to made it into the crucial move. Coming to the line together, many eyes were on Cavendish but a tactical error saw him come up short and Sagan secure another 12months in the rainbow jersey.