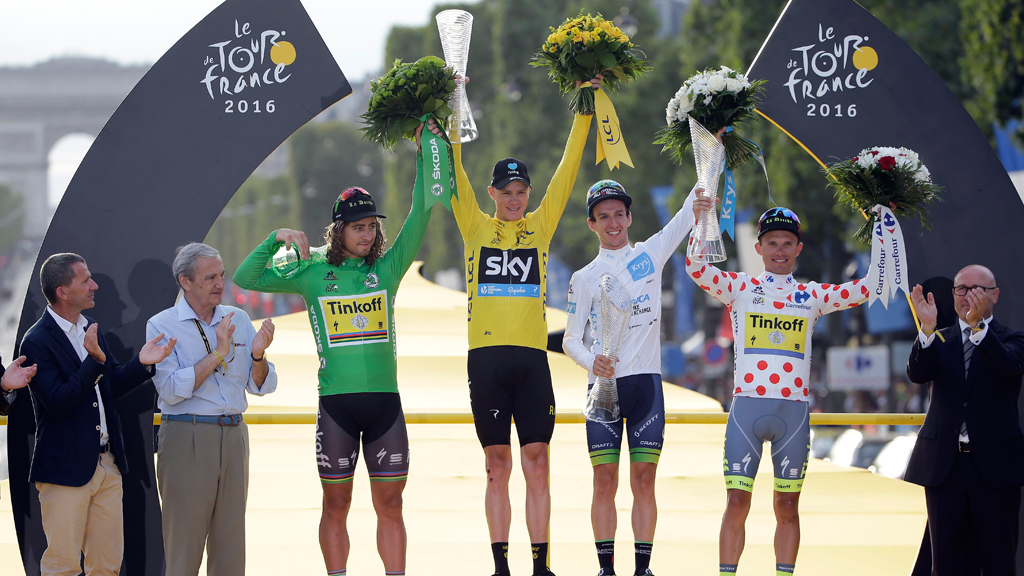 The three Grand Tours represent some of the biggest and most popular, not to mention most gruelling, races on the cycling calendar – the Giro d’Italia, Tour de France and Vuelta a Espaana.

We take a closer look at the 2016 editions of each one in today’s #YearInReview.

The Grand Tour season kicked off in May with the Giro d’Italia and it proved to be the most fiercely contested of the year.

Dutchman Tom Domoulin thrilled his home crowd in the Netherland to take the first maglia rosa on offer in the opening time trial whilst Marcel Kittel returned to the rider we all know to take stages two and three before the race moved back to Italy.

After a conservative first week, the major general classification contenders showed their cards across three consecutive mountain stages in the middle week of racing.

Steven Kruijswijk of Team LottoNL-Jumbo had a stranglehold on the maglia rosa, sitting pretty with a two-minute 12second lead heading into the final week of racing, with Esteban Chaves (ORICA-BikeExchange) and Vincenzo Nibali (Astana Pro Team) behind.

The first day of racing in the final week saw Kruijswijk extend his lead to three minutes before the drama began.

Kruijswijk was as strong as any climbing up the ascents, but came undone on his less-preferred side of the mountain, the descent, on stage 19. The race leader misjudged a corner and ploughed dramatically into a wall of snow and it was the end of his reign in the race.

Chaves took the pink jersey on stage 19 before another spectacular day of racing saw Nibali attack and show his ‘form of old’ to take the jersey away from the young Colombian for his fourth Grand Tour victory.

The Tour de France, the biggest annual sporting event in the world, also didn’t disappoint, with plenty of drama to keep us all guessing despite a dominant four-minute victory by Chris Froome (Team Sky).

The re-emergence of Mark Cavendish (Team Dimension Data) as the world’s fastest sprinter was a surprise for many in the first week with the Briton claiming three of the first six stages.

But throughout the three weeks it was the performance of world champion Peter Sagan that caught the eye, the Slovakian riding himself into the breakaway day after day on his way to claiming the green sprint jersey.

Drama first hit when Briton Adam Yates (ORICA-BikeExchange) attacked the general classification riders on stage seven only for the air to come out of the one-kilometre to go banner, causing it to drop heavily into the young rider.

But it didn’t end there. On stage 12, a motorbike was blocked by fans as Froome and other general classification contenders went crashing into it from behind. Froome’s bike broke and, in some of the most dramatic vision we have seen, the reigning champion began to run up Mont Ventoux by foot.

In the end, Froome’s time was adjusted and the Sky rider was never really challenged for the yellow jersey. Romain Bardet (AG2R) gave the locals something to cheer about finishing second overall with Nairo Quintana (Team Movistar) rounding out the podium. Yates finished fourth overall and became the first Briton to win the white jersey, whilst Australian Richie Porte (BMC Racing) finished in fifth overall.

The Grand Tour season wrapped up in Spain with the Vuelta a Espana, featuring a brutal three-week route and some of the year’s most exciting racing.

The difficultly of the route saw an absence of the world’s fastest sprinters, but 2015 Cadel Evans Great Ocean Road Race champion Gianni Meersman (Etixx-Quickstep) and young Dane Magnus Cort (ORICA-BikeExchange) stepped up to show their speed and promise for the future, taking two stages each.

On the general classification front, Nairo Quintana and his Movistar team looked like the strongest team and they delivered with a one-minute 23second overall victory.

The most decisive day on stage 15 was also the shortest. It followed a brutal mountain day but with just 118km to race, Albert Contador (Tinkoff) initiated a crucial breakaway from the flag – one that Quintana made.  The most noticeable riders missing were Chris Froome (Team Sky) and Esteban Chaves (ORICA-BikeExchange) who were left to limit the damages on the final climb of the day.

With Quintana and Froome looking concrete in the top two positions, the final place on the podium came down to the penultimate day when Chaves launched a brave attack with 40km to go to link up with teammate Australian Damien Howson to knock star Spaniard Contador off his home Grand Tour podium.