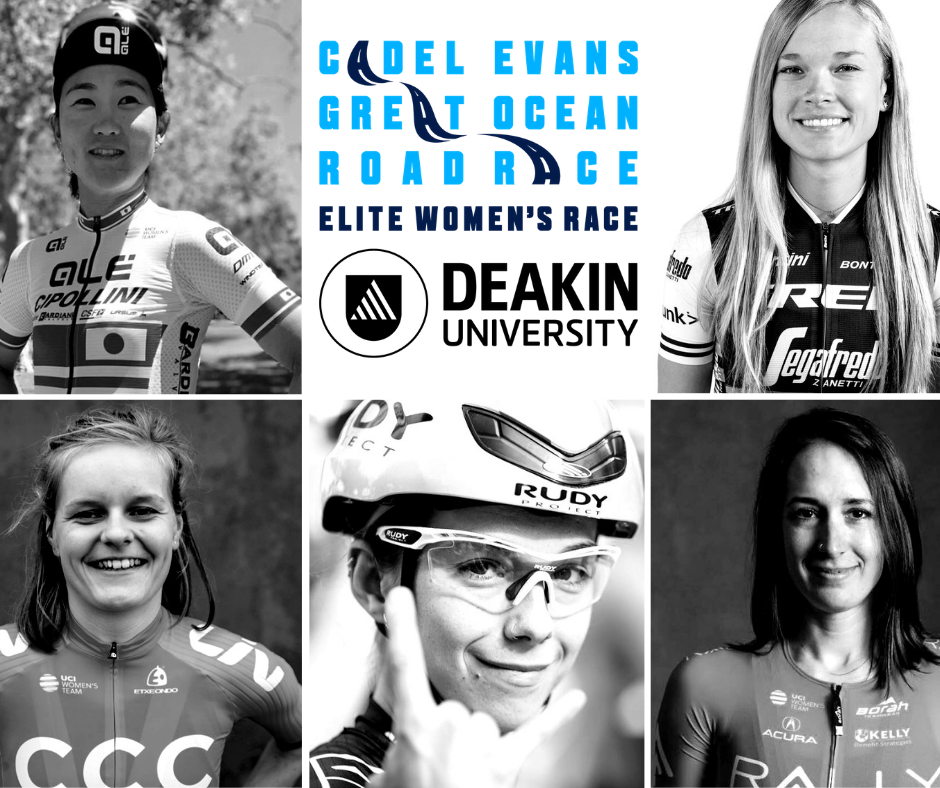 Hear from five champions of the UCI Women’s WorldTour on what it takes to win the Deakin University Elite Women’s Road Race, plus why they love riding Victoria’s Surf Coast.

It takes a versatile, all-rounder with grit and tenacity to win the Deakin University Elite Women’s Road Race. And, now that it’s part of the UCI Women’s WorldTour – the competition will be next level on 1 February 2020.

For Victorian Shannon Malseed (Team TIBCO – SVB) the race is a highlight of her season.

“I grew up on the coast in Narrawong, near Portland, so it is always special to spend time on the ocean especially in summer,” she says.

To win the race, the 24-year-old year old believes it takes “a versatile rider who can battle through the cross winds, get over the punchy climbs and either time trial to the finish solo, or win from a select bunch”.

Tayler Wiles (Trek-Segafredo Women), who has raced the classic four times, agrees. “You have to be an all-around, smart, savvy and strong rider,” she says.

“There are flat crosswind sections, steady climbs, short sharp climbs and a finish circuit through the city that is great for spectators.”

Different to other WT classics

The key point of difference from other WorldTour classics is the Australian summer heat. The peloton typically race in temperatures of between 25-35°C compared the European classics, which can often be cold and wet.

The coastal cross winds can provide some reprieve from hot conditions, but the winds also challenge teams to stay together in a bid to protect their best riders. As the peloton hits the Great Ocean Road, teams must navigate towards the front group for the best chance of finishing strong in the back end of the race when having the numbers is an advantage.

“There are a lot of contenders for this race,” says Jeanne Korevaar (CCC-Liv), who has partaken twice and loves the “amazing views alongside the Great Ocean Road and the relaxed atmosphere.”

Being the first one-day classic on the UCI Women’s WorldTour calendar makes it hard to predict who will come out in podium form, and who is still building towards the European classics that follow.

Yonamine Eri (Alè Cipollini) says: “As it’s the first one day road race of the season, I can’t expect what will happen.”

The 28-year-old believes the most challenging aspect of the race – but also her favourite section – is the final 20 kilometres, which includes the punchy 830-metre Challambra Climb.

The rapid ascent, first made famous in the 2010 UCI Road World Championships, is where crowds gather for street barbeques and the atmosphere peaks for the Queen of the Mountain summit.

Jeanne adds, it’s always challenging to get the team in a good position for the run-up to the last climb.

“It’s all about having a strong team with good communication to be in the front position when entering the bottom of the climb. Then, after that the climb itself, you just have to give it your all.”

The fastest point in the race comes with the Scenic Road decent where riders touch 80 km/h before coming into Queens Park and the finishing straight at the scenic Geelong waterfront.

What it means to win

“While it’s very important to start the year off strong it’s even more crucial to build powerful, sustainable momentum. The race is a great platform to stoke this momentum!”

For Shannon, welcoming her team mates to her home state is also an opportunity to build morale. This year, the Team TIBCO – SVB women went sailing on the pristine ocean and hit the local coffee shops with force.

“I love the summer of racing in Australia,” she says. “The best part – aside from the [coffee] brews – is seeing family and friends; and having them able to watch me race and see what I do for eight months of the year when I’m outside of Aus!”

To find out more about the race, course and region visit Deakin Women’s Race.