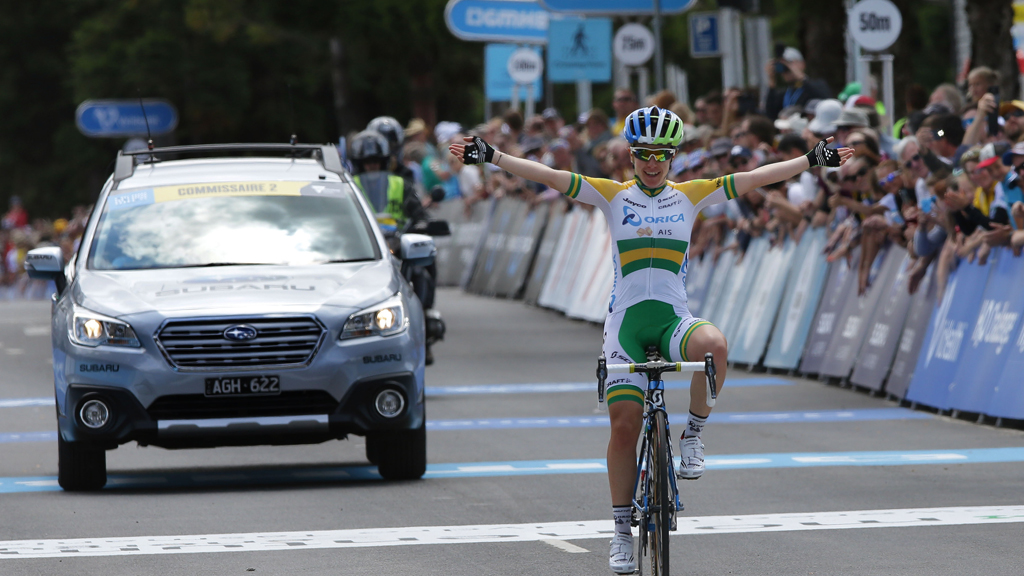 Forty nine seconds behind Spratt was Rachel Neylan who made it an ORICA-AIS 1-2 by outsprinting Wiggle High5’s Danielle King.

Taking her first win in her national champions stripes, Spratt was estatic to take the victory.

“It’s been a dream start to 2016 for the team, pretty much winning all the races we have targeted, which I think highlights how well everyone has been racing. We’re going with a plan and everyone’s committing 100% and everyone is being given opportunities too, which I think is the most pleasing thing. Our aim now is to take that form over to Europe.”

“Today the field kept whittling down and toward the end it was almost a Wiggle High5 – ORICA-AIS battle and we got the better of them. I managed to escape knowing Rachel could play her card behind if it came back together” said Spratt.

The race got underway under gloomy skies, and despite several attacks, nobody could get away as the peloton kept things together through the first two sprint points which were taken out by hour record holder Bridie O’Donnell of Rush Women’s Team.

“I just felt terrific in the first couple of hours of the race so I managed to get that first sprint pretty easily and in that second sprint coming into Torquay. Again, I was just riding on the front and was trying to ride hard tempo and managed to get it as well.”

As the race approached the Queen of the Mountain climb at Bells Beach, it was High5 Dream Team’s Jessica Allen who launched an attack to take the jersey.

Shortly after getting away, Allen was joined by Team Bikebug-NextGen’s Taryn Heather, and the two worked well to build a gap that stretched to 1 minute 50 seconds ahead of the peloton with just over 30 kilometres to race.

Determined not to be upstaged, the powerful squads of ORICA-AIS and Wiggle High5 drove the peloton, and the catch was on.

With the breakaway caught, Chloe Hosking launched a counter-attack, and was joined by defending champion Rachel Neylan. Two quickly became four as first Danielle King then Amanda Spratt joined the duo to form a powerful quartet.

“The Wiggle High5 girls were absolutely incredible today but unfortunately ORICA-AIS had one up on us. I think the pressure was on them today, so fair play to them for pulling it off.”

This morning, Cadel Evans joined over 3,500 recreational cyclists to warm up the course for the elites in  the sold out Momentum Energy People’s Ride.

The Cadel Evans Great Ocean Road Race, Elite Men’s Race will take off from Eastern Beach Road in Geelong at 11.10am tomorrow with first place expected to cross the finish line at approximately 3.30pm.