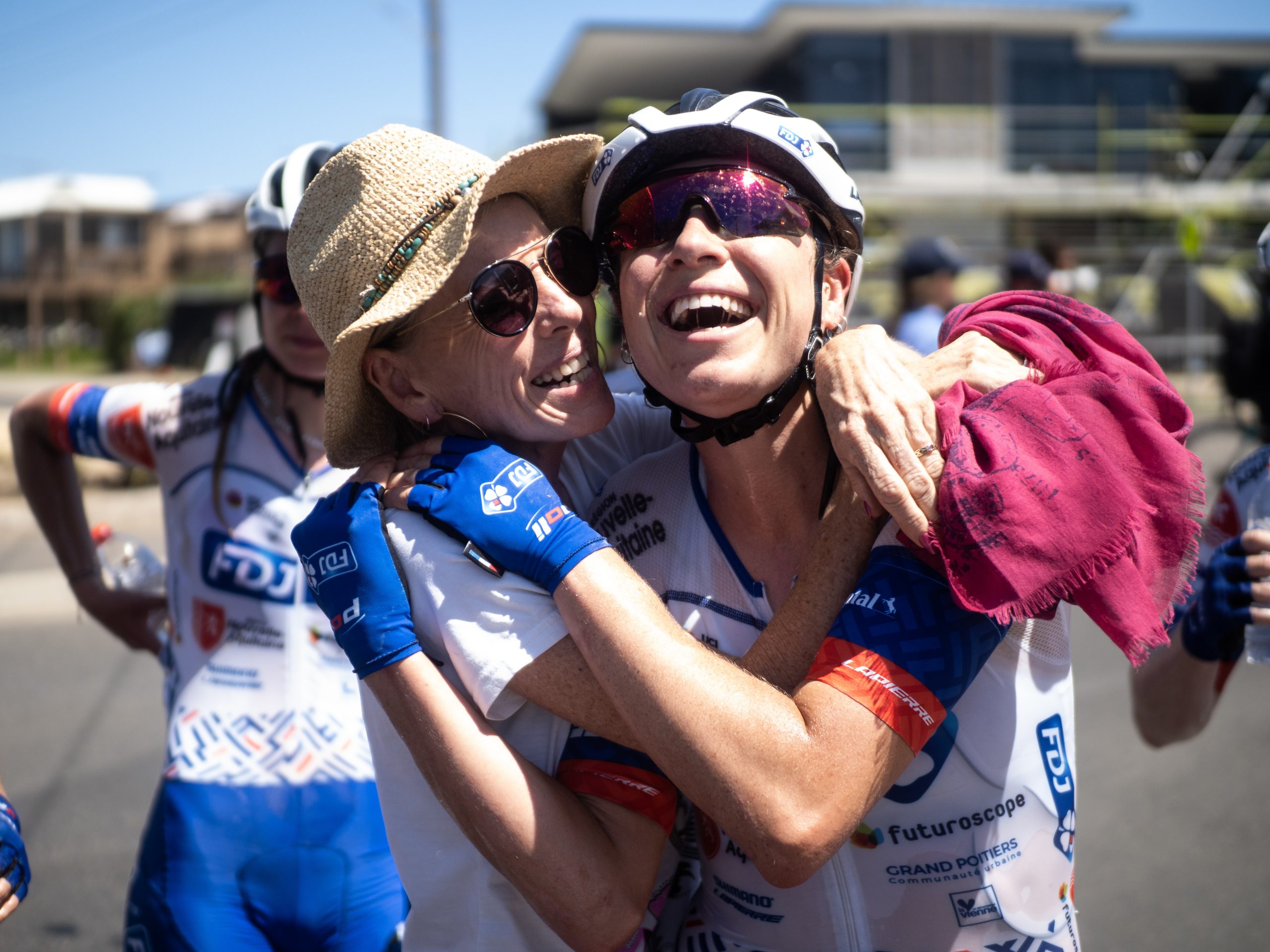 Mother’s Day with the Chapmans

Brodie Chapman describes her mum as energetic and emotionally intelligent. While Bernadette says her daughter – the inaugural women’s Towards Zero Race Torquay winner – is adventurous and tenacious. Here’s why!

For the first time in almost 10 years Brodie Chapman and her mum Bernadette, a keen rider herself, will spend Mother’s Day together.

It’s rare for the Chapmans to be in the country at the same time, let alone at the family home in Mount Glorious, a small community in the rainforest north west of Brisbane.

However, with much of the world in isolation and the coronavirus pandemic putting the brakes on the UCI Women’s WorldTour, Brodie is back where she grew up – and, riding the trails that carved her way into the pro peloton in 2018.

“I never would have anticipated I’d be here this May. In this current situation, it is a pretty awesome place to be,” says the 29-year-old.

“I am here with my partner, who rides just as much as me, we have heaps of curvy roads with decent climbs and you can ride all day without a traffic light in sight. It’s also nice to spend some time with my family when my training isn’t so focussed.” 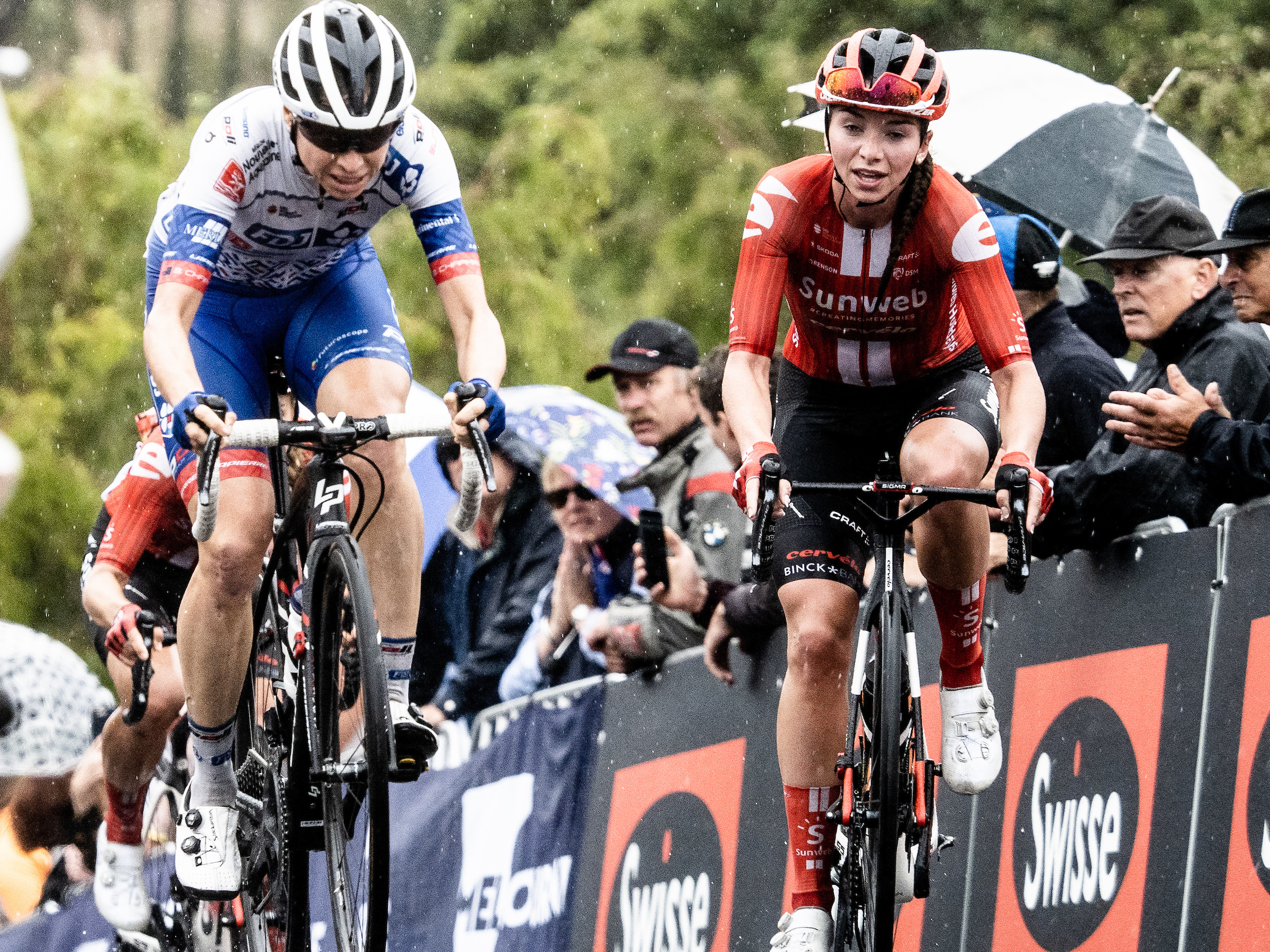 After joining French outfit FDJ Nouvelle – Aquitaine Futuroscope earlier this year, the Australian racer was anticipating a demanding schedule of competition. But, so far, the Deakin University Elite Women’s Road Race has been the first – and only – meet of the 2020 UCI Women’s WorldTour calendar.

In the 121km race starting and finishing in Geelong on 1 February, Brodie won the Swisse Queen of the Mountain jersey. Her domination on the Challambra Climb was indicative of the tenacity she’s shown from a young age riding the Hinterland hills – and beyond.

When Brodie was just 14, she joined Bernadette on a nine-day Bicycle Queensland tour, including covering 100km in a single day.

“She did it with energy to spare and I could see she had the long distance gene,” recalls Bernadette, a former distance runner and daughter of cyclist Alan Sweeney.

“Growing up, Brodie was full throttle from sunrise to sunset. She was always on a bike, whether it was her BMX, mountain bike, road bike, her fixie or commuter. If she was riding she was in her element.”

But, After a MTB accident that tore her anterior cruciate ligament, Brodie turned her full attention to the road bike.

She says: “They say that kids who try lots of sports early often end up specialising later in life at something they really love and have the autonomy to pursue it”.

There’s no doubt, the variety of riding disciplines she enjoyed growing up played an important part of her pathway on to the WorldTour.

“They allowed me to discover my strengths and weaknesses, my commitment to take risks, to push my body and find what really lights me up.” 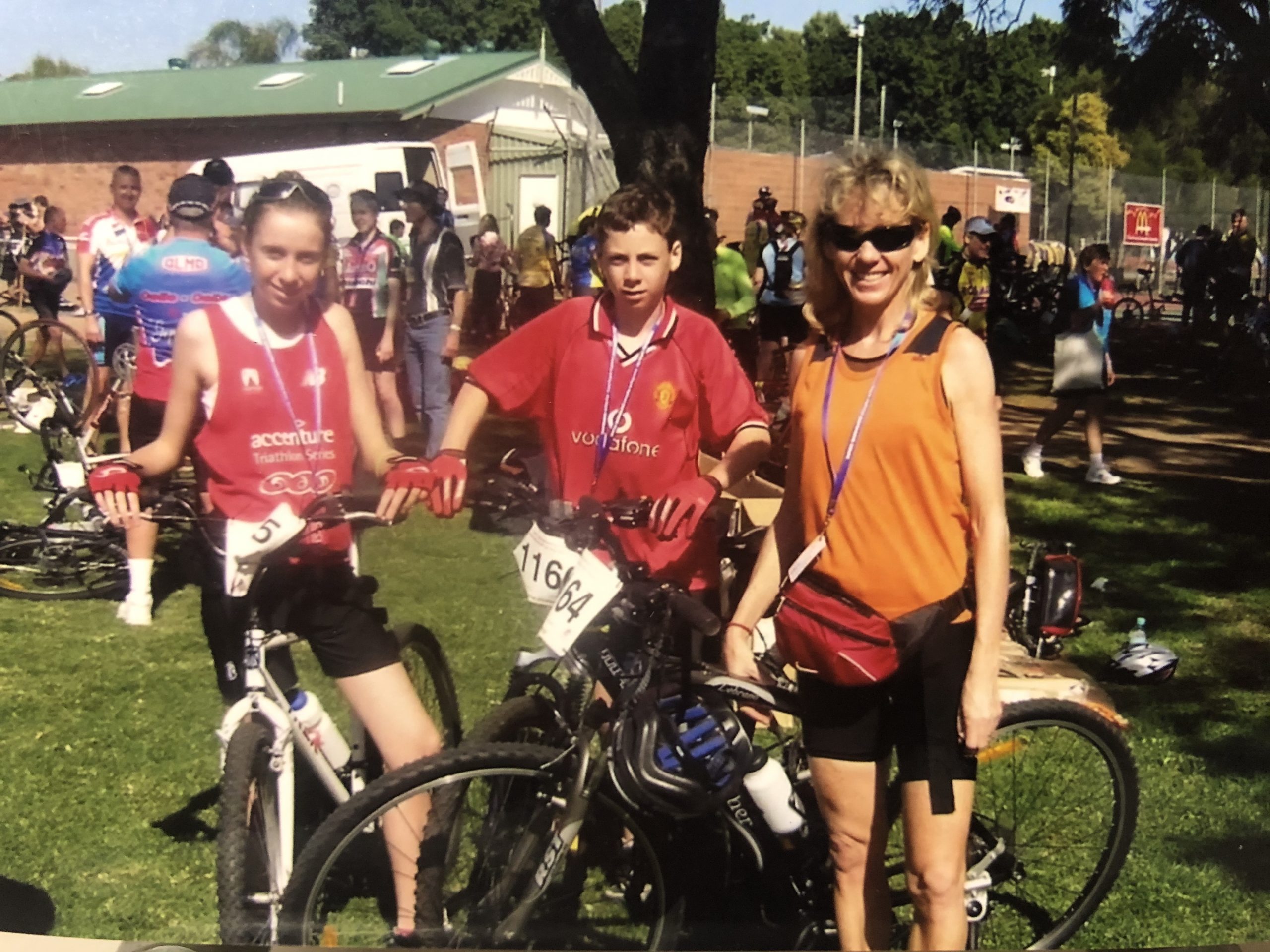 The self-confessed risk taker applied a “trial and error approach” at Towards Zero Race Torquay on 30 January.

Coming into the race, Brodie had collected five wins in 2019 and represented Australia at the UCI Road Cycling World Championships in September – contributing to the nation’s silver medal. The Tokyo Olympics were firmly in her sights.

With temps at 37°C on the Surf Coast, the FDJ star made her move on lap five of the eight lap UCI 1.1 circuit race. National Road Race champion of Chile, Denisse Ahumada (Agolico) and Lauren Stephens (Team TIBCO-Silicon Valley Bank) made attempts to stick with her, but the Queenslander took out the 104km race with an emphatic solo victory.

“I didn’t plan to win initially, but I love racing like that,” explains Brodie. “You respond at the right moments and then keep assessing yourself and the race to see what you can do.

“Winning on home soil is certainly the dream for many riders. It often takes me a few months to process the feeling of a win, and to actually reflect and be proud of how it played out.”

Not only was it an emphatic victory for Brodie and her new team, but Bernadette was there to cheer Brodie over the line and her father, Rhett Chapman, was also in the feed zone offering words of encouragement during the race.

Bernadette recalls: “Standing at the finish line seeing Brodie out front as she passed us on those last three laps was euphoric!

“We’ve always been fans of Cadel’s, so it was super cool to see him present Brodie with a top step prize.” 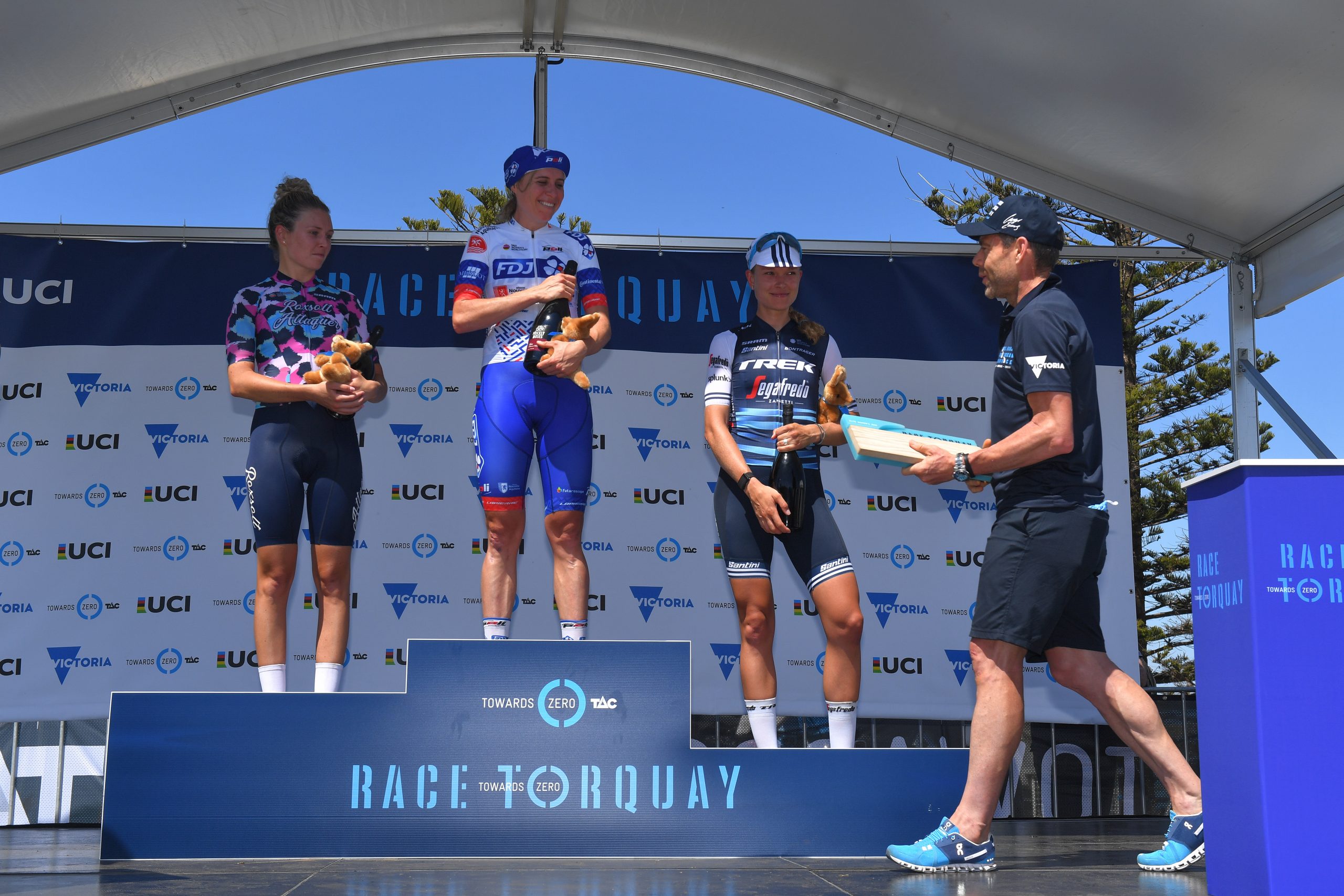 The family affair continued on Saturday with Bernadette taking part in the Swisse People’s Ride. Her preparation included riding the mountains where Brodie now trains, commuting around Brisbane on her flat bar road bike and, most notably, completing her first self-navigated cycle tour across Austria last year.

“I cycle more for the moving meditation but, as a bonus, it keeps my body fit and healthy too,” says Bernadette, who’s first bike was handmade by her father when she was six.

She fondly recalls the day of the ride: “The organisation of the ride was so professional and the route was flat and easy, I’ve already got a few more friends and family keen to sign up for the next Swisse People’s Ride”.

“Mum had a really positive influence on my riding. She never pushed it as a competitive pursuit, but she never planted any seed of doubt in my mind that I couldn’t do something as simple as riding from A to B, or to do a ‘long ride’ if you paced yourself correctly.

“I guess you could say she instilled confidence in cycling from a young age.” 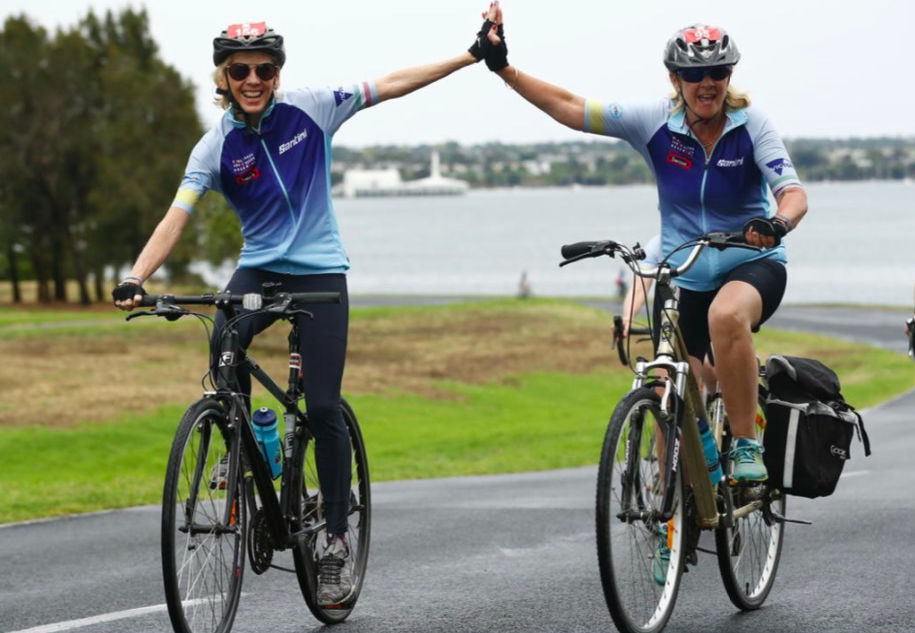 This Sunday will be a special Mother’s Day in the Chapman household. While Brodie will start the day on the trainer to meet her program requirements, she will then join Bernadette, brother Teal and sister Rhylee for “a big vegetarian feast”, followed by some board games.

“I love being a mum,” says Bernadette. “I absolutely loved all the fun with the kids when they were growing up and we still have lots of fun as a family now – we all like to play.”

However, motherhood has also had its challenges. Teal was born with a rare immune deficiency, which meant many hospital visits over the years.

“Brodie and Rhylee spent hours with us in the hospital entertaining themselves,” recalls Bernadette. “I think this contributed to their ability to be empathetic, but to stay positive and have fun irrespective of where they are.”

And, this year, they are grateful to be together in Australia – happy and healthy.

Follow us on social media @cadelroadrace for more insights about staying fit and strong, what the pros are up to in isolation and news from the Cadel Road Race community.