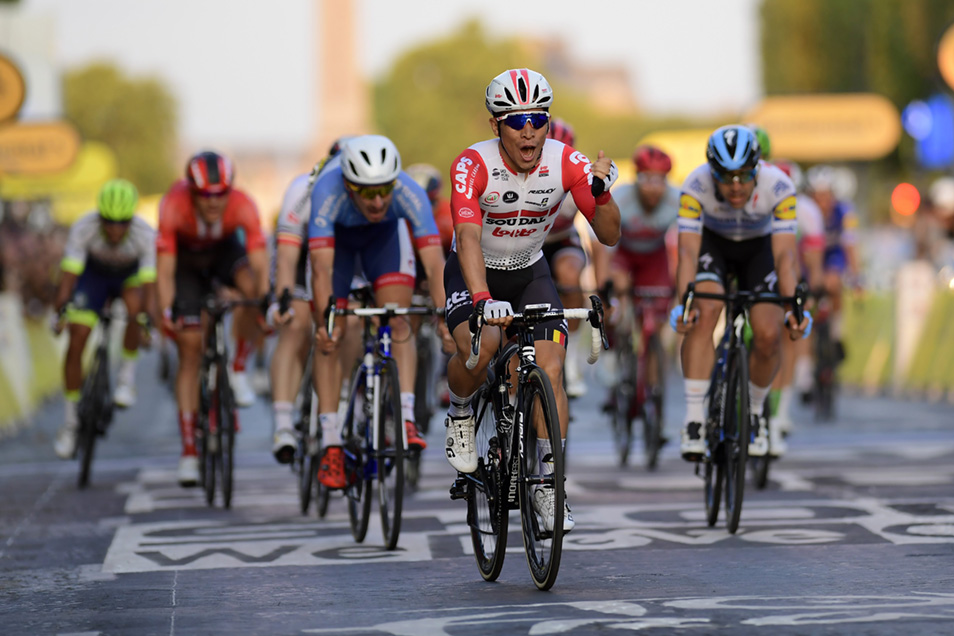 How the Aussies did at Le Tour

It was billed as the highest Tour de France ever. Plus, one of the most unpredictable. Here’s how our Australian cohort faired in the greatest cycling stage race on the planet.

Excitement, elation, emotion, risk, reward and tears – the past three weeks had it all. And, for the 2019 winner of the Tour de France – 22-year-old Egan Bernal – life will never be the same.

As Team Ineos celebrate claiming the top two podium positions with reigning champion Geraint Thomas finishing second ahead of Steven Kruijswijk (Jumbo-Visma) – we take a look at how our Aussie stars finished up.

At just 25, Caleb Ewan has become the fastest cyclist in the world! The Bowral-born sprinter has not only achieved his dream of competing at the Tour de France, but by far exceeded it claiming the mantle of most consistent sprinter for the 2019 edition. Ewan’s results included: 1st in stages 21, 16 and 11, 2nd in stage 7, and 3rd  in stages 1, 4 and 10.

“Probably the most special moment of my career so far. My daughter’s due date was today but instead she was here to see me win a Tour de France stage!” – Ewan after his second win.

The moments you dream about! Win #2 at this years @LeTour pic.twitter.com/CXtosIVzbW

Tasmania’s Richie Porte enjoyed a sigh of relief when making it through the first week of the Tour, after crashing out on stage nine in 2017 and 2018. However, while the mountain legs in the French Alps and the Pyrenees suited the 34-year-old, losing time early in the race – particularly on stage 10 when crosswinds wreaked havoc – proved too costly.

So the time for talking is done, into the mountains we go…. @TrekSegafredo @splunk #TDF2019

After 13 years as a pro-cyclist, including stage wins in all three Grand Tours, road captain Simon Clarke was as attacking and determined as ever at this year’s Tour de France. While he could not secure a major result, the 33-year-old finished 9th in stages 9 and 12. He continuously found himself in the breakaway and enjoyed some of the best form of his career.

“After 5 years of trying to get in the TDF breakaway on my birthday I finally managed to nail it today. Had a great day out and had a crack at the stage, and ended up 9th.” – Clarke after stage 12.

It wasn’t the race all-rounder, ‘Bling’ Matthews, had in mind. After riding himself into the history books in 2017, winning the green jersey and two stages, he wasn’t able to relive such form this year. Matthews managed 2nd in stage 3 and 4th in stages 8 and 10, and heartbreakingly suffered a mechanical on the Champs-Elysées.

“It’s been a rollercoaster of a Tour de France for us but we fought for it every day, I’m super proud of all the boys.” – Matthews after stage 20.

As predicted, Bendigo cyclist Jack Haig shone in his maiden Tour de France. His strength in the mountains and support for Mitchelton-SCOTT stage-winning team mates – Simon Yates, Daryl Impey and Matteo Trentin– was resolute. The Australian-backed team enjoyed a record four stage victories and its most successful Tour de France ever.

“When Daryl Impey won on stage 9 that actually made the team more hungry to get another win because it seemed more possible and the momentum was there.” – Haig shared his TDF diary.

While Mitchelton-SCOTT’s GC goals didn’t go to plan, the team – with the help of domestique Luke Durbridge – was able to successfully re-evaluate and come away with four stage wins. This was the West Australian’s sixth Tour de France with the team – he finished strong and said it was by far his favourite edition.

“Every single day we’ve ticked the boxes as a team, tried to put someone in the break, tried to ride GC, we really put our best foot forward every day we could.” – Durbridge after stage 21.

What a man @SimonYatess winning his first #TDF stage win. Everyone on cloud nine @MitcheltonSCOTT pic.twitter.com/SDr01JJZ5z

Brisbane born ‘Heppy’ was again one of the team’s strong men this Tour – playing a valuable part in Mitchelton-SCOTT’s success, particularly in the team’s lead-out train and team time trials. Lucky for them, the track world champion and two-time Olympic silver medallist turned his attention to road cycling in 2017.

“I think we can be extremely proud with what we’ve achieved here. I for one can say I’ve had great fun with all the guys, on and off the bike like always.” – Hepburn after stage 21.

The Andorra-based Australian walked away from the Tour after stage 12  – the day before the world champion was firm favourite to win the individual time trial. He told SBS Cycling Central before the stage that he planned to save energy for stage 13. His withdrawalwas reported as “more complicated and sensitive” than one single issue.

“I’ll just have to wait and see how I wake up. It hasn’t been an easy Tour. We’ll see how today goes. I’ll take tomorrow as it comes.” – Dennis before stage 12.

See the stars of UCI WorldTour cycling in Geelong and Torquay this summer at the Cadel Road Race. Sign up to our eNewsletter for team and rider announcements, event details, giveaways and more.