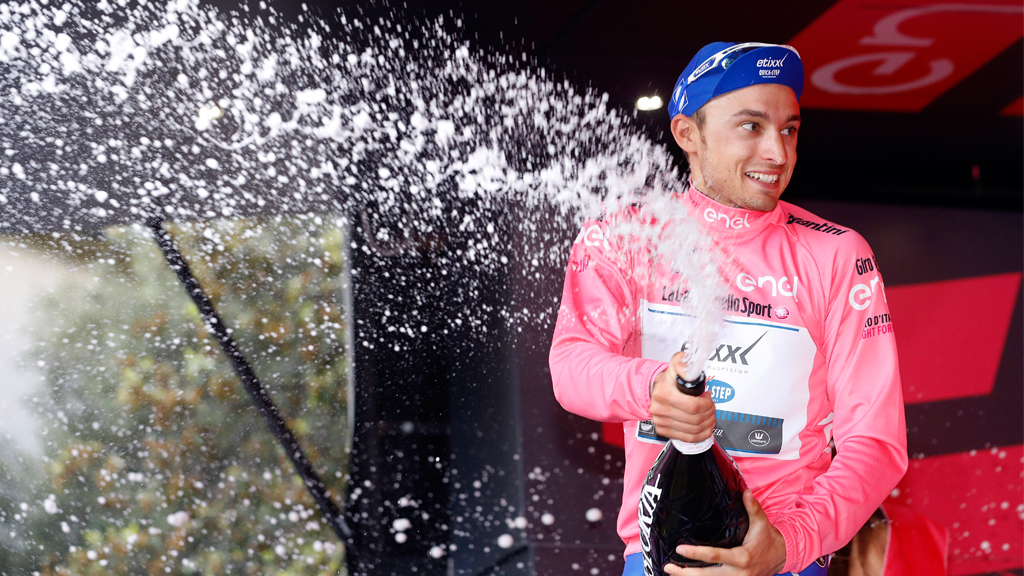 The Giro d’Italia breaks for the first (real) rest day this evening following nine days of racing that really did have it all.

After starting in the Netherlands for the first three stages, the first Grand Tour of 2016 then transferred to its home in Italy for the remainder of the three weeks of action.

In the first nine days, we have seen four sprint stages, two time trials, stages for the break and the initial general classification battle starting to take shape.

Gianluca Brambilla (Etixx – Quick-Step) takes the maglia rosa into the break having claimed it with a solo victory on stage eight and just holding on to a one-second lead following last night’s stage nine time trial.

Here’s a quick summary of the action so far:

Dutchman Tom Dumoulin (Giant Alpecin) thrilled his home crowd in the Netherlands to take the first maglia rosa on offer for the 2016 Giro d’Italia in the opening time trial.

After losing both the Paris-Nice and Tour de Romandie time trials by less than a second earlier in the season, Dumoulin turned the tables in a thrillingly close finish to claim the big one by 0.01second ahead of Primoz Roglic (LottoNL-Jumbo).

The Slovenian enjoyed the dry roads offered to early starters before the heavens opened up and made the undulating course technical and risky for those higher in the general classification.

After six days on the pink jersey in the opening week, Dumoulin was disappointed with his efforts in the wet, finishing almost two minutes down on Roglic, and has conceded he won’t be a player in the general classification moving into the second week.

Much to the delight of many, Marcel Kittel returned to the rider we all know after a tough 2015.

The Etixx-Quickstep rider took the first two sprint stages (stage 2 & 3) and was looking hard to beat despite the depth of sprinting talent lining up in this year’s Giro d’Italia.

After a break to let the mountain goats play on stage four, Andre Greipel (Lotto Soudal) got one back on Kittel taking a convincing win on stage five.  The ‘Gorilla’ evened the scorecard with a second stage victory on stage seven.

Stage profiles suggest the world’s fastest men will need to wait until stage 12 for their next opportunity, but we know Kittel won’t prevail having withdrawn from the race after stage eight.

Elia Viviani (Team Sky) and Boy Van Poppel (Trek-Segafredo) join Kittel as sprinters who will watch future opportunities from the sidelines having missed the time cut off on the eighth stage.

Whilst there has been some minor ironing out in the race to the final maglia rosa, there is no clear winner out of the first nine days of racing.

Of the pre-race favourites, Movistar have two in the top ten with Andrey Amador (3) and Alejandro Valverde (6), Vincenzo Nibali (Astana Pro Team) sits in fifth 53seconds down on Brambilla and Mikel Landa Team Sky is in eighth, one-minute 18seconds behind.

As expected Australia is without a contender in the general classification, Damien Howson (ORICA-GreenEDGE) the highest placed rider in 56th position over 24minutes behind the leader.

But to give you something to cheer about, Australian outfit ORICA-GreenEGDE have Colombian Esteban Chaves still in contention in 13th position having survived the two time trials and looking forward to the serious climbing to come.

On a stage front, sprinter Caleb Ewan has been on a learning curve against the toughest competition of his young career. The latest sprint was his most promising, narrowly missing the podium for fourth place on stage seven behind Greipel.

With a few of the sprinters already out of the race, Ewan will keep battling for the next opportunity on stage 12.