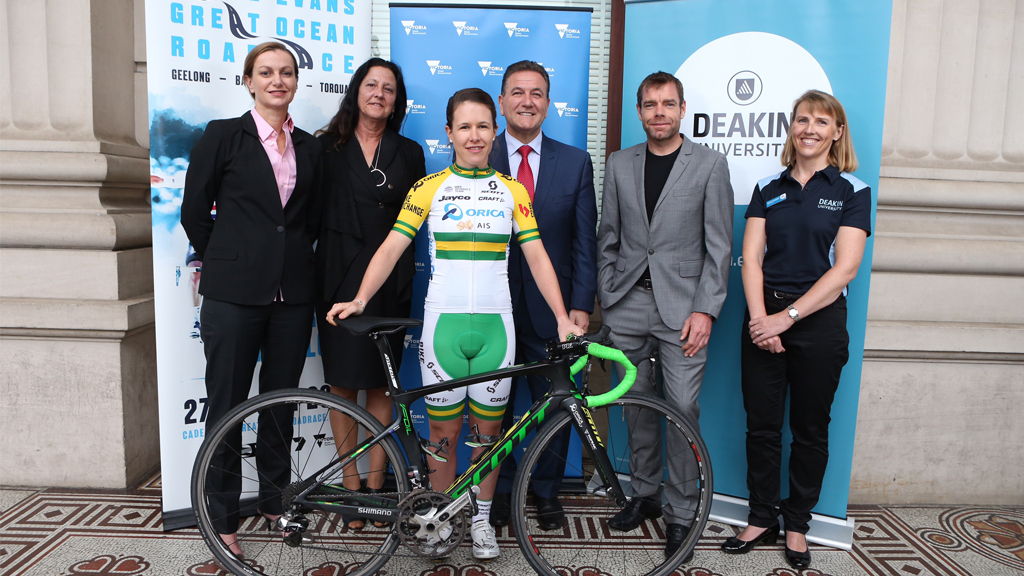 The 2017 Deakin Elite Women’s Road Race was launched today, with a stellar line up of international and top Australian outfits contributing to the race’s strongest field in history.

In more exciting news, the Deakin Elite Women’s Road Race will be broadcast LIVE between 1pm – 3pm on Saturday, 28 January on the Seven Network.

The massive boost is the first time an Australian women’s cycling race will be broadcast live since the world championships in Geelong in 2010.

Ten international teams, up from two in 2016 and including eight UCI Women’s Teams, will take centre stage on Saturday, 28 January. Four Cycling Australia National Road Series Teams will also line up in the UCI 1.2 classified race.

“This is another win for gender equality in sport – and every step towards equality counts,” Victorian Minister for Tourism and Major Events John Eren said.

“The star-studded line up for the race is simply outstanding. We knew the Elite Women’s Race would attract some of the world’s best cyclists and we were right.

“The Cadel Evans Great Ocean Road Race isn’t just a stunning sporting spectacle, it shines a spotlight on one of Victoria’s most prized tourist destinations and creates new opportunities for local businesses.”

Australia’s own UCI Women’s Team, ORICA-AIS will return in 2017 with defending champion, Amanda Spratt set to defend her 2016 title.

Nominated to ride for German outfit, Canyon//SRAM Racing will be Aussie Tiffany Cromwell and Olympian Lisa Brennauer who has several big wins under her belt including the 2013 UCI Road World Championships.

Returning to the Cadel Evans Great Ocean Road Race and racing with a different team in 2017 will be 2015 Australian National Road Race and Mountain Bike Champion, Peta Mullens riding for Hagens Berman Supermint.

On hand for today’s launch, Spratt confirmed her title defense and welcomed the challenge of the tough field.

“I’m excited to be returning to the Cadel Evans Great Ocean Road Race to pull on the number one bib and try to defend my title.”

“It’s great to see so many strong teams confirmed for 2017. This will definitely lift the standard of racing but we’ll be working hard to continue our winning streak in the event’s third year.”

“The race itself is one of the best organised in the world. The course offers up so many possibilities and is a great one for me and the whole ORICA-AIS team. It’s a great feeling to be able to race in Australia, the atmosphere coming up the straight being cheered on by an energetic Aussie crowd is amazing.”

See what other key stakeholders said about the exciting news:

“My vision for the Cadel Evans Great Ocean Road has always included a strong women’s race.”

“I’m thrilled we are able to provide a highly competitive event that attracts some of the world’s top female teams and riders and can’t wait to watch the race on 28 January.”

“To have the Deakin University Elite Women’s Race broadcast live places us on par with other big women’s races such as La Course.”

“We’ve seen mass audiences watch women’s sporting events on Seven over the past year including the AFL women’s match, the Matildas’ successful Olympic qualifying campaign and a whole host of women’s sports from Rio 2016, so we look forward to bringing another outstanding event to Australian sports fans.”

“The number of women’s teams, particularly UCI Women’s teams confirmed for the 2017 Cadel Evans Great Ocean Road Race is a reflection of the continued exceptional delivery of this world-class event.”

“The Deakin University Elite Women’s Race continues to go from strength to strength. In only its second year with UCI 1.2 Classification, the importance of this 1-day ‘classic’ in the global Women’s UCI Road Calendar is confirmed with the confirmation of 10 international teams including eight UCI Women’s Teams.”

“To have the race broadcast live on free-to-air television for Australian fans, with livestream from the PLUS 7 Live App, is extremely exciting for women’s cycling and more broadly for women in sport.”

“Sport and education have the power to transform lives and to unite communities. This is why we are proud to partner with the Cadel Evans Great Ocean Road Race, which shows perfectly how both fields can bring the wider community together.

“Deakin is passionate about supporting women to achieve their goals and so we support the Deakin University Elite Women’s Road Race. This event will showcase what excellent elite female cyclist can do. We believe at Deakin that all women should be able to achieve at the highest possible level in whatever they choose to do.”