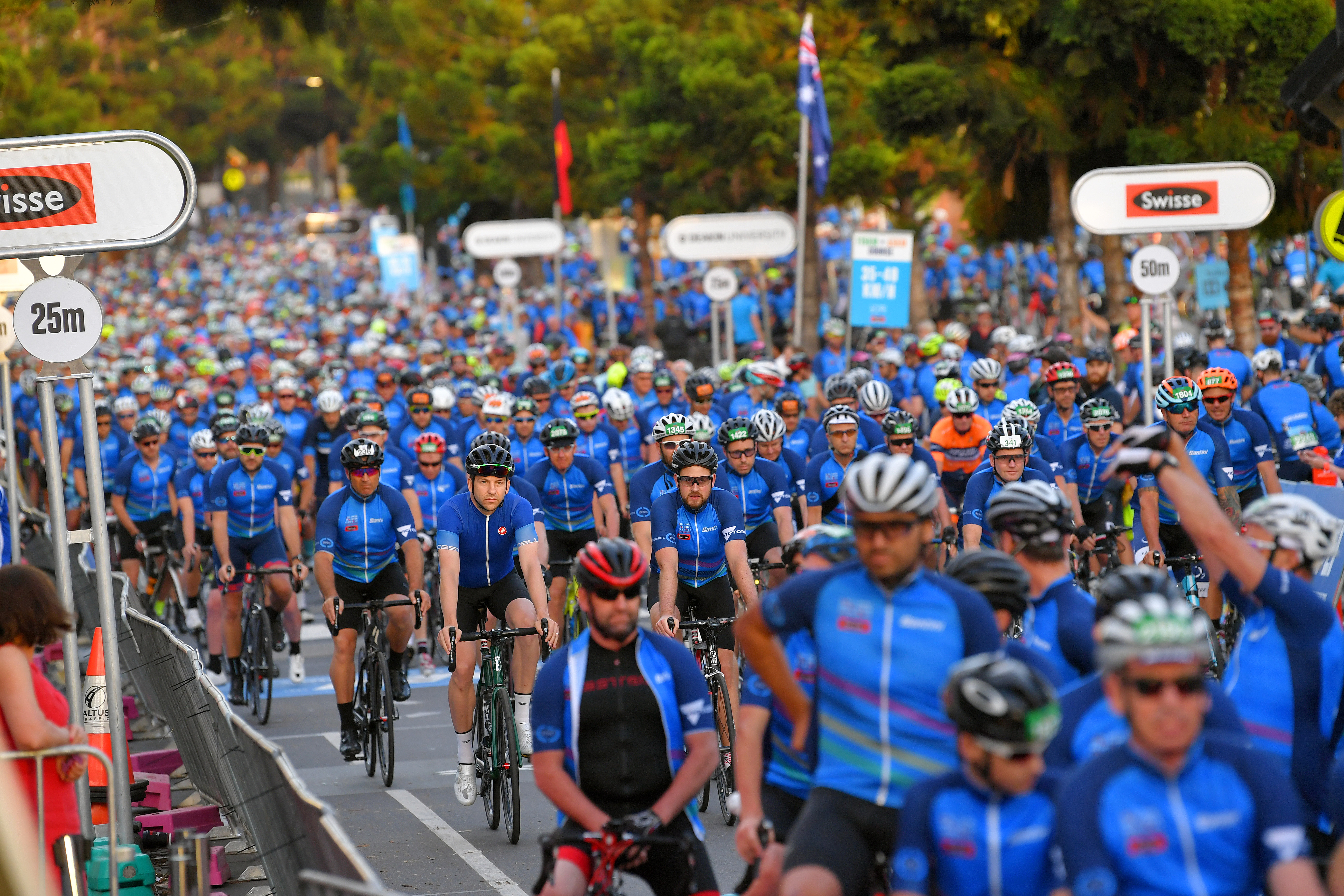 They ride to be role models for their kids, to stay mentally and physically fit and even to beat cancer.

Join us as we celebrate those who have conquered every SWISSE PEOPLE’S RIDE since its inception.

Michelle Roberson looked across her handlebars, a sea of riders in ocean blue surrounded her at the start line of the 2018 Swisse People’s Ride.

Tears came to her eyes. Just getting from Lavington, New South Wales, to Geelong was a challenge. Cycling 35 kilometres one month after finishing cancer treatment was an absolute triumph.

“I registered well before being diagnosed with cervical cancer and I wanted to get back on the bike as soon as possible after my treatment,” recalls Michelle.

This summer, to celebrate two years of being cancer-free, the 48-year-old federal government computer programmer will line up for the 65km and her sixth Swisse People’s Ride.

Dealing with the diagnosis

An estimated 951 new cases of cervical cancer will be diagnosed in 2019 and symptoms are hard to detect, according to the Australian Institute of Health and Welfare.

Michelle had no idea her body had developed a locally advanced cervical cancer in mid-2017.

Immediately after being diagnosed, the mother of two began a 10-week intensive treatment program of chemotherapy and radiation.

A cyclist since her teens, Michelle rode the eight kilometres from home to hospital for the first three rounds of chemo, but then she became anemic and it was too difficult to ride.

“Cancer robbed me of my working self, my culinary self, my motherly self, my social self, my intimate self with my husband, and my cycling self,” she says. “But cycling was one thing I could control, and I was keen to get back on the bike as soon as I could.” The power of cycling

One month after finishing her treatment in late 2017, Michelle pulled on her kit. “It was just a three-kilometre ride, but I slowly went for a few more knowing the Swisse People’s Ride was coming up in January.”

In fact, cycling became her main method of regaining fitness and improving her long-term health prospects. Research shows, resuming regular exercise after cancer treatment can improve the long-term prognosis for people who have had cancer.

On 27 January 2018, Michelle finished the 35km feeling more determined than ever. “I wanted to ride further and I was desperate to keep going,” she says.

After receiving the official all clear on 15 February, a week later Michelle did the Lake Hume Cycle Challenge – 35km. “This was doubly emotional on the start line as it was my birthday, and the funds raised went to the local cancer hospital,” she says.

Next came the Fitz’s Challenge 50km in Canberra and then the 2019 Swisse People’s Ride 65km. After a solid campaign of cycling since Michelle is now preparing for her return to Geelong this summer and hopes to achieve her best time yet!

“I cannot wait!” she says. “I know being fit and healthy will not necessarily stop me from ever being diagnosed with cancer again, but it will put me in a better position.”

Over the coming months, we’ll be celebrating our five and six-time riders across our social media channels. Keep an eye out for their inspiring insights.

To join Michelle at the 2020 Swisse People’s Ride, register today. Every rider receives a jersey designed and made in Italy by Santini, and you go into the draw to win a trip for two to Milan!