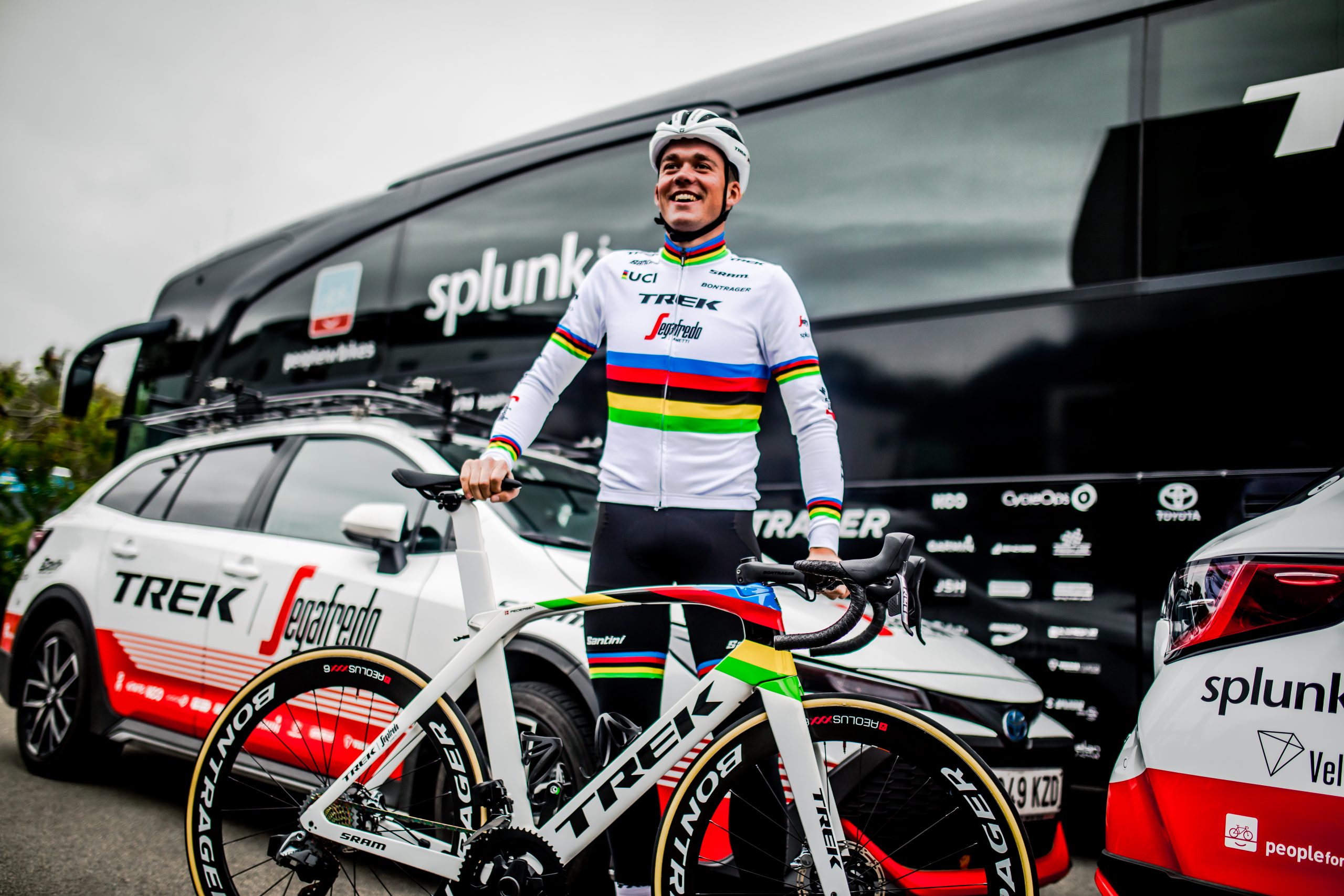 Every road race world champion in cycling brings their own style to the rainbow jersey and Australian fans will be on hand to witness Mads Pedersen as he starts his season off in Australia, before progressing to the spring classics.

A Pedersen win was not high in the minds of many tipsters before the 2019 road world championships. Even when he made the decisive move of the race, eyes were turned towards the more credentialled riders like Mathieu van der Poel and Matteo Trentin when discussing a potential winner.

Nonetheless, it was the flying Dane who triumphed in the miserable northern England conditions and will wear the coveted rainbow stripes for 2020. It’s a feat that the world’s best struggle to achieve at any point during their career, but one that the 23-year-old sees as a great achievement.

“The honour is super big,” said Pedersen. “Even if you’re 23 or 37, the honour, it’s super big. Now I have to improve and be on the top level all the time instead of once in a while. That’s basically the main goal for next year.”

The eyes of the world will be watching keenly as Pedersen launches his season in January, one that will build towards the key cobbled classics like the Tour of Flanders, where Pedersen was second in 2018. The Cadel Evans Great Ocean Road Race will be one which suit the classics man’s talents and looks set to see Pedersen in his element.

“It’s a part of my building process to do Cadel Evans but I also want to be good of course,” said Pedersen. “It’s embarrassing if you wear that jersey and you’re not good. We have a bigger contender for the win in that race, of course it depends on how we are racing the race but Richie he will be there, and he will go for the win and I will try to support him as best as possible. But if we can come back to a sprint, maybe I can get my chance.”

Pedersen referenced his own inconsistent form from last year, where he only took two wins and a handful of top-ten finishes. One of those wins has had the effect of putting a target on the back of the young star of the peloton, but Pedersen plans to embrace and honour the jersey.

“There will be a lot of pressure, but it also gives me some confidence,” said Pedersen. “I’m pretty sure that the highest pressure on me is coming from myself. So, if I can relieve the pressure on myself I think no one will be disappointed because I’m the guy who wants to honour the jersey the most and give it respect and be in the top of the races.”

Pedersen’s social media personality and appearances in interviews portray a down-to-earth young man who is always happy to share the spotlight with his long-time partner and now wife. Pedersen doesn’t envision that fame and fortune will go to his head now that he will be one of the first names announced at every race and be the most sought-out rider by fans looking for selfies.

“I got married, I got a dog. I got winter tyres on my car. To be honest I don’t want it to change,” said Pedersen. “Of course I have to do more media stuff and it’s a little more focused on me but I would really like to keep my life the same as before. It’s actually really important for me.”

“At one point you have to stop with selfies before the race, I also have to race. But I try to do my best to make everyone happy.”

The searing heat of mid-summer Australia isn’t likely to help the performance of the Trek-Segafredo rider, though he has performed well in the past, taking a stage win at the Herald Sun Tour ahead of Steele von Hoff on the traditional nationals road race finish. While Pedersen thrived in apocalyptic conditions in Yorkshire to take his world title, soaring temperatures are less to his liking.

“To be honest I don’t like the heat that much,” said Pedersen. “I think you can find some nice pictures of me sitting in a cooler behind the van in Down Under somewhere. I’m more in for the rainy days and colder weather. My body is built for that.

“The rain I just don’t mind – if it’s a rainy day you can’t change that – it’s the same for everyone in the peloton. Just go – put another rain jacket on and keep focused.”

As the pageantry and expectation surrounding a rainbow jersey continues into the year, staying focused will be a tough ask, but the young Dane seems well-equipped for the future.

Find out more about the Cadel Evans Great Ocean Road Race, including the 2020 Event Schedule.