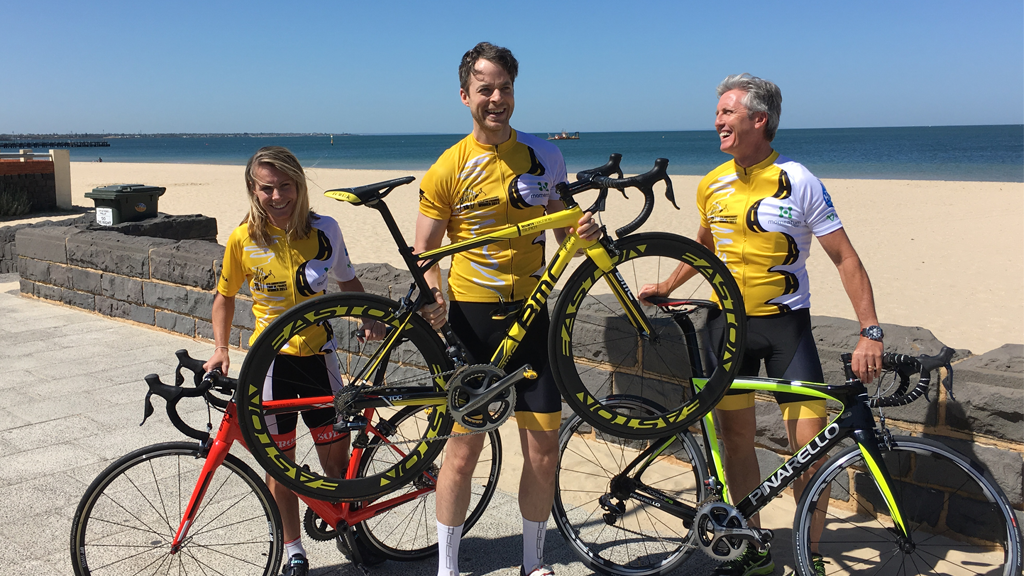 The launch saw the trio reunited after they joined Australian icon Cadel Evans in Italy for a charity ride last year and prompted a return to the bike for Blake after recent surgery.

“I’ve only ever gone for about 15 bike rides in my life and about 20% of the time I ride, it’s with Cadel,” Blake told the Herald Sun.

“When I get around Cadel I start feeling inferior and I have to prove myself,” he continued, admitting to signing up to the longer 111km course on Saturday, 30 January 2016.

Blake and Evans will be keen participants in the Momentum Energy People’s Ride as part of Australian ultimate weekend of cycling and entertainment at the Cadel Evans Great Ocean Road Race. Both will don the exclusive yellow jersey – a commemoration of the five-year anniversary of Evans’ historic Tour de France victory – when they join thousands of other participants on a stunning course that includes the Great Ocean Road.

Wilson, a former soldier and keen member of Soldier On, will also join the pair in the unique opportunity to ride shoulder to shoulder with one of her heroes.

“For a start, Cadel Evans is a huge hero of mine so to potentially be riding nearby him would be fantastic,” Wilson said. “It’s such a beautiful area down near Geelong and to ride along the Great Ocean Road will be a real buzz.”

“I have just recently discovered cycling and it’s such a great sport for feeling comradery around you and seeing some of the most stunning scenery in the world.

“The yellow jersey is perfect. I think it’ll be a real incentive to enter and such a great momento to keep.”